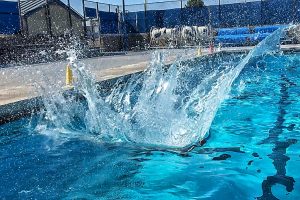 The team at Chino has continued with its overhaul since its new coach came aboard at the start of summer. A new system of gameplay, new coaching staff, and a new attitude. “I would like to say they are building on skills they have already acquired over the years. We have a certain system that blends fundamentals and advanced play. The team has taken to it well and I am extremely proud of them in their adjustments. They all have increased their Water Polo IQ in our water polo analytics classroom and I can’t wait to see them put it into action this season. We were trying to sneak up on our competition with our improvement, but now we have some big shows to fill with these initial expectations. We’ll do just fine no matter the outcome.” said Coach Hulme.

The quiet confidence could come from a new belief system to where winning is not the main objective but believing in yourself and sacrificing for your teammate is. This new mantra is the driving force of the team and the athletes hope that the doubling down on these beliefs, success will follow and the winning will just be a by product.

“We in no way had an idea we would be in this position to start the season. We have confidence in our abilities because we work extremely hard, but we didn’t think anyone would take notice except for ourselves.” Team Captain Goalie Justin Weidl said when hearing about the poll.

What makes for a pretty interesting situation is that while Chino made the preseason poll, so did their League and Cross Town Rival Don Lugo. Every year the teams clash in “The Fishbowl Game” Series to determine bragging rights for the area. Both coaches, Enrique Barajas (Don Lugo) and Chris Hulme (Chino) have agreed to play both games “Under The Lights” this season to bring in the community and create a competitive atmosphere for both teams. Not only will it be a local draw to see, but could have potential CIF Divisional Ranking implications.

It’ll be interesting to see how the season plays out, but for now, the Chino Cowboys are ecstatic to be right where they are at.