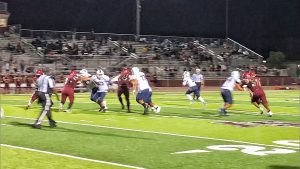 Chino High School won its first Football Game of the season Friday Night against Indian Springs 13-6 at the brand new top of the line high school football field at Coyote Stadium in San Bernardino.  The Indian Springs Coyotes were celebrating their first game on their brand new field, while Coach Joey La Rosa and the Cowboys were looking to get the season started in the right direction with a win.

Within the first few minutes, Indian Springs struck first with a touchdown making the score 6-0.  But by Halftime, the Chino Cowboys were able to stifle their excitement and slow down their progress by evening the score 6-6, before both teams went to the locker rooms.  Throughout the start of the 3rd quarter, neither team could put the ball into the end zone despite a few dazzling plays.

With 6:39 to play in the 3rd Quarter, right outside of their red zone, Chino threw a 24 yard aerial strike to score and take the lead 13-6.  The Cowboys exploded in jubilation as the ball seem to be floating in the air for what seemed like minutes before it reached the hands of the receiver as he dove for it in the back of the end zone.  It was the pass heard throughout the Inland Empire.  From that moment, it injected energy into both teams as the game was back and forth with missed opportunities on conversions until the final few minutes.

With 2:51 left in the game, Indian Springs took possession of the ball and had an amazing opportunity to win the game.  For several plays, the Coyotes were able to get to Chino’s second level and continue the chain gang’s forward motion down the field.  With 1:47 seconds left, Chino was able to apply pressure to the quarterback and made him incomplete his pass.  The Cowboys were able to stop two more consecutive plays, which led Indian Springs into a 4th and 11 with just over a minute to play.  The Chino Cowboys were one play away from winning until a controversial pass interference call gave Indian Springs a new series of downs.  The Chino Sidelines erupted in dismay, but Indian Springs played on.  On the next 3rd down, Indian Springs threw to the right side of the field where a Chino defender was able to dive and catch the ball in the air to intercept the ball.  The Cowboys went wild as victory was now in hand, until the referee blew the play dead as an incomplete pass.  The Chino faithful was not too happy as this was second close call within the final minutes that gave Indian Springs another opportunity to win.  But on 4th down, the Chino Cowboys were able to stop Indian Springs from advancing and went on to win the game.

Immediately after the game, both Principal John Miller and Athletic Director Michael Hinkle were on the sidelines to congratulate Coach Joey La Rosa on his first win as Head Coach.  “We won. Pretty ectastic.  I am really excited for our program, our kids, and our school.  We had several missed opportunities in the red zone that we need to work on and improve.  We will get it going and practice on it this week.  I am happy that we got the first one for our Cowboys.”  Coach Joey La Rosa said after being congratulated.

Things at Chino High School are pretty exciting these days.  With a new constructed school moving in in the near future, a new football staff to encourage growth, and lot of positive vibes, there are some great things coming from the Cowboys Community.  It’ll be fun to watch how it all plays out this season with Chino Football.

The Chino High School Cowboys play at home for their Home Opener next Friday Sept. 6th at 7pm against Artesia High School.  It should be an exciting game, as the new “Voice of Cowboy Football” has been selected for Home Games and will be announced this week.  Cowboy Country looks to bring a lot of excitement and energy to the games.  Get your popcorn ready Cowboys, as it will be a fun experience for Chino Home Games.