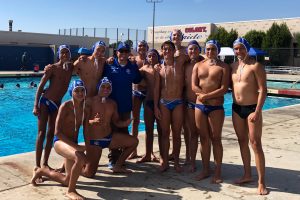 The Chino Water Polo Team has undergone drastic changes over the last three months leading into Boys Season. Those changes have focused on an understanding of fundamental ODP (Olympic Development Program) Curriculum from their Head Coach Chris Hulme along with a deep understanding of Wooden Leadership Principals that focus on process and personal responsibility to create results. That training was put on full display this weekend at “The Thrills in the Hills Tournament”.

“I received a phone call early afternoon on Friday from the Tournament Director asking if we could fill a last minute spot of a team that dropped. Obviously it is great opportunity to compete against some amazing teams, but that wasn’t on our radar since we weren’t in Gameday Mode. It was quite a challenge to get our Varsity Team together for the weekend and see what our team personnel would look like based on everyone’s schedule.” Coach Hulme said.

After making a bunch of phone calls, arranging last minute transportation, and getting most of the team together, the Chino Cowboys rushed off to two Friday evening games. All of the excitement led to some scattered play in the first two games. Chino lost by one in both of their Friday Night Games in two Back-to-Back Buzzer Beater Losses.

“I was actually disappointed in our gameplay to start the weekend. I felt like we were in the Twilight Zone because our play did not match our capabilities. No disrespect to the other teams, but we should not have allowed the games to be that close. Those two buzzer beater losses are really challenging our team emotionally right now.”

After a long Inspiration Fueled peptalk late Friday Night after the first two games, the Cowboys returned Saturday to show everyone at the tournament that the previous days performance had been a fluke. The Chino Cowboys took control of both of their games Saturday and put on offensive show against their competitors. They won their first game 13-3 and their second 12-6 not letting their opponents lead all day. “A huge difference today… I felt like we played better and we settled our nerves down. We played like a unit. There was lot of growth from our team today.” Coach Hulme said proudly about the improvement of their team.

Hopefully the Cowboys will ride the wave of inspiration into this next week. Chino will host their first home game of the year against Division 5 Rival La Sierra. Whistle blows at 3pm. On Thursday, the Cowboys have another home game at 3pm against another Division 5 heavy hitter Etiwanda.

Come out and support the Chino Water Polo Team. All home games are free and open to the public.