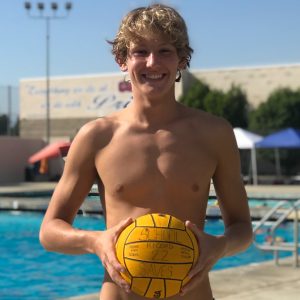 Besides the two emotional victories on Saturday, the Chino Cowboys had much to celebrate. Goalie Justin Weidl set a School Record of 22 Saves in a game for Chino. Justin is a Junior and looking to play water polo at the next level. “Justin is one of our team captains as a Junior and has a good head on his shoulder trying to unite the team. We have many leaders on our team, but Justin stood out and made some huge defensive stops for us.” Coach Hulme said. Currently, Justin who plays Goalie and is 6’5” as Junior, plays club at Foothill Water Polo Club, has an incredible 3.8 GPA, is interested in playing at the next level preferably at any of the UC Schools that wish to have him a part of their team. “I don’t want people to think that I want to play at a particular school, I really just want to be able to play anywhere who has a great coach and team that matches the goals I want for later in my career.” Justin said when asked what his plans were for the future.

Justin is only a Junior and will mostly likely grow even more before he is finished with high school. “He was a huge asset in the wins this weekend keeping some amazing shots out of the goal. He has quick hands and great composure which is nice when you have an athlete that doesn’t get stressed out in intense game situations. He is very calm and collected and makes a lot of great decisions in the pool. I can’t wait to see him develop into an even better player over these next two seasons. Whoever decides to give him a scholarship is going to be an extremely lucky school, coach, and team because he is a difference maker in and out of the pool.” added Coach Hulme.

Look out for Justin Weidl and the Chino Water Polo Team to do even greater things in the future. Come out and see Justin and the rest of the team play this season. All Home Games are free.

***Schedule is available on ChinoHighAthletics.com