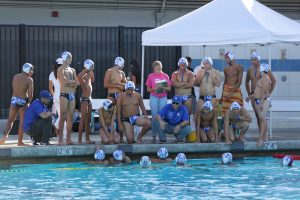 Coach Hulme came aboard in the summer running a co-ed program to develop water polo skills that would lead into the school year. Last year the boys team didn’t field a JV team for every game through out the season. This year is a different story. With a new Head Coach under the helm, by the second week of school, the team numbers had grown to 32 athletes in the Boys Program. “I did a lot of recruiting. Just getting the word out on campus and hoping people would want to join our unique learning experience was my hope. About 30 Boys showed up, and for the Girl’s Program, we are expecting at least that many as well. Interest is high and that is great for the school. The more the merrier… I just want these students to have opportunities and get involved.” Coach Hulme said.

Bringing in sports analytics, heightened sports psychology, introducing film editing software for scout/training video, and Wooden Principles were just the start. The team introduced Social Media on Facebook, Twitter, and Instagram which led to being nicknamed “The Singing Water Polo Team” for their hilarious in-practice songs that had thousands of views across all three platforms. “No matter how hard training can be and how difficult growing pains are… you have to have fun. If you or your players or even the people around you in your program are not having fun while learning, then you need to seriously re-evaluate how you are getting results with your team.” Hulme said.

Flash Forward. With Boys Season coming to a close, the Varsity Team is just one win away from beating last year’s Win Loss record. The JV Team is on the verge of winning a JV League Championship having to still face League Rivals Diamond Bar and Don Lugo in the second round. Almost immediately, the program has surpassed the previous year’s results. Along with the team’s positive results, Coach Hulme has renovated the equipment and provided every athlete with a custom team swim suit at no cost due to fundraising, sponsors, and negotiating funds for the program. “It’s been amazing. I have been focused on exactly what I wanted to build and people here at Chino have been incredibly supportive. So many people within the district and on staff have a “YES” Mentality and a team spirit that resonates into the short term results we have already obtained. I am just excited to continue that journey into girls season now.”

Additionally, Coach Hulme’s responsibilities go beyond Water Polo at Chino. At the start of Football Season, Hulme became the Football Announcer at the home football games. “My personal goal is to instill hype and confidence to whoever is listening. I believe building the kids up at every chance I have is important to creating successes on the field. I call it “Inspiration Based Performance” and I get to use the microphone to do it for Friday Night Lights.” Coach Hulme says with a wink.

Girls season for Water Polo is right around the corner and many will be keeping a close eye to what Coach Hulme will do next to build the team up. Until then, Chino High School is excited to have him on their team and coaching on the Cowboy’s Sidelines.