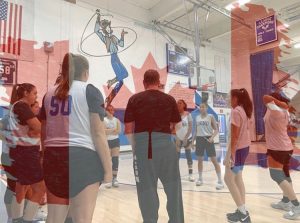 When Coach Jonathon Davis came to Chino High School five years ago from Centennial High School (Corona), he took over for Coach Van Embricqs who had done a solid job in establishing a foundation for the girls program.  After talking to a few other Southern California coaches, Coach Davis laid groundwork in getting Chino invited into The Reb Invitational in Edmonton, Alberta in Canada.

For the last thirty seven years, teams from across multiple countries have been coming to this Canadian Tournament.  Their opening ceremonies have been quite a draw and have sold out every year.  Teams normally play in front of crowds of about 2,000 spectators.

Chino High School is only One of Two Teams that will play from The State of California.  Chino Girls will play their first game against LeBoldus, who only lost two games last year.  “I heard of the tournament from Leonard Decoud who used to coach at JW North.  He is a great guy who sent me all the info and made the introductions to make this opportunity happen for our girls”, Coach Davis said when talking about how this became a reality of traveling to another country to play in a prestigious tournament of this caliber.

Despite the struggles of fundraising and organizing for a trip of this magnitude, the positive benefits are huge in building the athletes up.  The experience and exposure this brings to the Chino Girls Basketball’s athletes and the program are immense.  The girls on the team are excited and are eager to play.  Many have not even traveled out of the state before, let alone the country.  This will be the first time Chino High School has been in invited to this tournament.  Known to be lighthearted and keeping a cool demeanor, when asked about expectations, Coach Davis responded, “Our goal is to do well and try to win the Tournament.  I know that will we do great and everything is gravy beyond having those expectations.  It’s all about the girls and their experiences.  I just want the best for them.”

The whole Chino Community is behind the team and are eager to hear about the adventures.  Good Luck Girls Basketball!

For more breaking information, stay tuned here on our website as well as our social media @ChinoHighSports and @ChinoHSCowboys for breaking scores and results from Canada.  Follow Coach Davis and the Team – Twitter: @OneLeggedCoach and Instagram: @ChinoGirlsBasketball